What is the Coptic Church?

The Term "Copt" - The term "Copt" and "Egyptian" have the same meaning as derived from the Greek word aigyptos. With the suppression of the prefix, the suffix of the word, the stem "gypt" has become part of the words for "Egypt" and for "Copt" in all the modern languages of Latin origin. The Coptic Church then is simply the Egyptian Church.

The Coptic Language - It is the last shape of the language of the ancient Egyptians. The earlier shapes represented in the Hieroglyphic and Hieratic and Demotic alphabet became inaccessible to the growing needs of daily life. After the spread of Christianity, Egyptian scholars trans-literated Egyptian texts into the Greek alphabet, and adopted the last seven additional letters of the Coptic alphabet from their own Demotic.

The Founders of the Church - The Copts pride themselves on the apostolicity of their national church, whose founder was none other than St. Mark, one of the four Evangelists and the writer of the oldest canonical Gospel. John Mark is regarded by the Coptic hierarchy as the first in their unbroken chain of 117 popes. He is also the first of a stream of Egyptian saints and glorious martyrs.

Church of Martyrs - After the martyrdom of St. Mark, the Coptic Church faced severe persecutions. The seventh persecution inflamed by emperor Diocletian; his reign (284-305) is considered by the Copts as the age of persecution. Under Maximin Daia (305-313), his successor in the East, the massacre continued for eight years of systematic killing. This could account for tremendous number of martyrs. So profound was the impression of the persecution of Diocletian on Coptic life and thought that the Copts decided to adopt for church use a calendar of the martyrs, the "Anno Martyri". The first year of that calendar was 284 A.D., the year of the disastrous accession of Diocletian.

Catechetical School of Alexandria - The school of Alexandria was undoubtedly the earliest important institution of theological learning in Christian antiquity. It was a college in which many other disciplines were studied from the humanities, science and mathematics; but its main discipline was religion. According to Eusebius, its founder was St. Mark who appointed Lustus as its dean, (later on, Lustus became the sixth patriarch). Most of the eminent leaders of Alexandria like Clement, Origen, Dionysius, Athanasius, Didymus the Blind and Cyril, were known to have been connected with it, either as teachers or students.

The Church of Monasticism - The Christian Church heavily indebted for the creation of monasticism which started in Egypt. Although St. Paul the Theban (died 340) is considered the first hermit, the origins of monasticism are ascribed to St. Anthony (251356) whose fame was spread by his famous biography written by St. Athanasius. The Fathers of the Church from numerous parts of the world came to Egypt for training in the way of monasticism. Monasticism has survived in Egypt and has given the Coptic Church an unbroken line of 117 Popes beginning with St. Mark. Although most of the monasteries have disappeared under the Arab persecution there is a revival in the surviving ones.

Adapted from "The Servants’ Manual" by Joseph Ibrahim

Faith of the Church

The Greatness of Alexandria

Alexandria was the cultural capital of the world when St. Mark arrived there. Its famous School was the centre of science and philosophy with a library filled with hundreds of thousands of books. The population of Alexandria was estimated to be from half to three quarters of a million,(1) who were Egyptians, Greeks, Jews, Romans, Ethiopians, Nubians and other races. 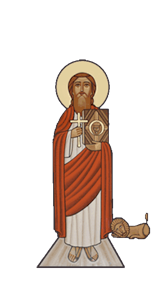 The Coptic Orthodox Church is an Apostolic Church, not only because her founder is St. Mark the Apostle who ministered in Egypt, ordained a bishop, priests, and deacons to aid him in his ministry and was martyred in Alexandria, and not only because her first Patriarch is St. Mark's successor through an unbroken chain of popes since the apostolic age, but also because she preserves the apostolic thought in her life, spirituality, liturgies and dogmas. She is actually a living extension of the apostolic church without deviation.

The Coptic Church is sometimes accused of exaggerated conservatism and refusal of concessions. As a matter of fact she is not stagnant or stolid but faithful and conservative, preserving the apostolic life, and desiring to offer the gift of faith in all its aspects throughout the ages.

Coptic Church, Part III: The Birth of the Church